IGCSE students at DAIS have initiated a collaborative literary programme with Fourth Form pupils of St. Albans School, Hertfordshire, UK through Skype link; both schools follow the IGCSE Literature programme. As a part of this curriculum, students study a collection of short stories from around the world. To make this Literary Voices Exchange more meaningful, the schools decided to discuss stories set in India and England (Narayan’s story A Horse and Two Goats and Hardy’s story The Son’s Veto). This ensured that students had an enhanced understanding of how cultures shape our thoughts, assumptions and actions. Consequently, students from both schools looked at the cultural background to each story and its role in both plot and characterisation. This initiated an interesting debate on the extent to which cultural stereotypes within these stories still inform human behaviour today.

DAIS students talked about modern India, its ethos and compared it to the India of Narayan’s narrative; this greatly benefitted the St. Albans students as they not only had a better appreciation of the story and its cultural moorings, but also learnt about India from an Indian’s perspective. Additionally, it helped them reconcile their divergent perceptions of India – that of urban modern India and portrayal of village life in the story. Similarly, DAIS students were introduced to a better calibrated understanding of the English sense of class through the informative discussions by pupils from St. Albans. Interestingly, both groups commented on the difficulties in appreciating Hardy’s 19th century prose.

The literary exchange led to a wider sharing of insights and perspectives, ranging from education systems, the role of religion and cultural traditions of marriage. The collaborative platform made students reflect on the significance of English Literature in communicating values and shared human experience and understanding. This was followed by a super enthusiastic comparative discussion of Indian Premier League cricket and Premier League football. The teacher leading the UK chapter, Mark Pedroz, said, “It’s a great opportunity to make these links through an international syllabus. The shared session with Mumbai enabled students to articulate their ideas and opened new insights.” It was a stimulating and educational experience in more ways than one. 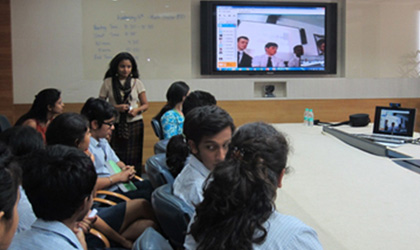