“Cooperation and Statecraft- The Stem of a Peaceful Society” 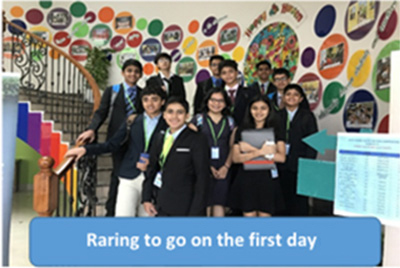 The Indian High School, invited RS schools from South Asia and the Gulf, Africa, Europe and the Mediterranean regions to participate in DXBMUN, an international Model United Nations conference, held in Dubai, from Wednesday 26th April to Monday 1st May 2017. 16 Students from DAIS attended the conference with outstanding success, bagging 7 awards.

Supporting the Round Square IDEALS, the conference incorporated significant training in the MUN skill set for all who are new to MUN, which simulated the work of United Nations and included the use of diplomatic language during debate and formulating resolutions. 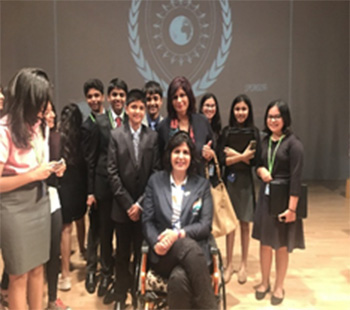 The highlight of the conference was the key note speaker, Ms. Deepa Mallik at the opening ceremony. She inspired the audience with vignettes of her life and delivered valuable learning through her personal experiences. Her mission: ‘Ability beyond Disability’ was the powerful message that resounded among the 400 odd participants. Summing up her varied experiences Ms. Mallik reiterated "Disability brought my life into focus” This statement found an echo in every heart. An army man’s wife, mother of two, a restaurateur with a social cause, a former beauty queen, an accomplished swimmer on the international platform and now an avid biker; Deepa Malik wears a multitude of hats and firmly refuses to let that her disability get her down . Malik became a wheelchair user in 1999. Most recently, she became the first paraplegic to participate in the grueling Tour-de-Himalaya Car Rally. 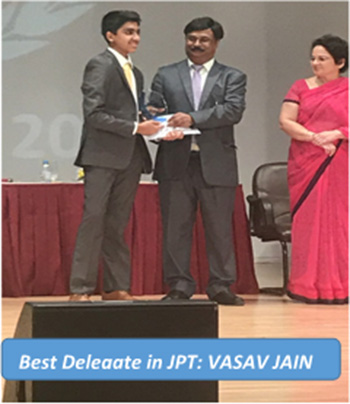 For the delegates of DAIS it was an enriching experience as they won 7 awards:

“DXBMUN, being my first MUN conference, was an enriching experience for me. I have truly returned with more confidence after developing skills such as eloquence, persuasion, negotiation and public speaking. I had a wonderful time debating on the controversial issue of Kashmir. Overall, it was a great learning opportunity.”

“JPT or Jaffna Peace Talks was a crisis committee in DXBMUN. I was the Naval leader of the Liberation Tigers of Tamil Eelam. The crisis committee was an excellent simulation for us to handle situations on the spot without any previous preparation. Being the naval leader of ‘militant’ organization that does not kill people randomly but works for the betterment of the neglected changed my perspective of looking at the world”

“DISEC or the Disarmament and International security council was by far the best committee I have been in. We had two topics: i) National Sovereignty and Asymmetric warfare ii) Preventive measures on the development of weapons of mass destruction. Being the delegate of the United States of America I had to deal with a lot of criticism of being a ‘hypocrite’ but I think the situation was handled well. We also had a crisis about a gas attack in Syria and how the President, Bashar Al Assad was kidnapped. Coming up with solutions was a lot of fun. I really enjoyed this conference and it really showed me what we as individuals can do to save the world”