The Round Square Regional Conference 2019 hosted by Singapore International School, Mumbai from the 17th - 20th January 2019 was attended by a group of ten DAIS student delegates. The theme of the conference - ‘Empower to Lead, Inspire to Act’, woven around the Round Square ideals of Leadership, Environment and Service was extremely relevant in the current world scenario. Filled with excitement and anticipation, they, along with all the other participating schools, flagged off Day 1 with the preliminary registration and a preconference ceremony followed by a briefing on the events of the day. Then came the ‘Ice Breakers’ - an hour of fun and social interaction. This was followed by a film fest with a cornucopia of Art films centered on social topics. A thought provoking discussion led by Ms. Rinki Bhattacharya highlighted the various social implications involved in the film. It gave them an insight into what exists and how they, as individuals, may help, both by being aware and finding solutions. 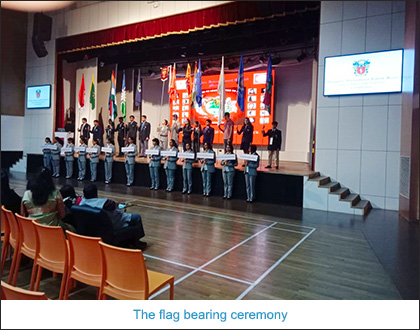 Day 2 of the Conference began with a series of felicitations and the flag bearing ceremony followed by a scintillating dance performance by the Shaimak Davar art troupe. There was, in addition, a marching quartet playing Indian music. The Opening Ceremony included a keynote address by Mr. Afroze Shah, who had single handedly initiated the 'Beach Clean-up' mission in Mumbai. His determination has led to a whole new facelift to the Versova beach and his selfless cause has earned him the title – ‘Champion of the Year’! After a conference photograph, the first Baraza session began with a discussion of the values evoked from the keynote speech. Post lunch was a fun filled treasure hunt with clues that led them on a mad dash around the school in a race against time! The second keynote speaker was Ms. Shaheen Mistri, one of the founders of Akanksha, a foundation dedicated to teaching children from underprivileged and backward societies. Then came the riot of colour, dance and music with the cultural performances by participating schools. Day 2 ended with an NGO mela with stalls selling merchandise to support various charitable causes such as Indian Cancer Society and welfare for Stray Dogs. These two days gave them an insight into the understanding and importance of social causes and the role one could play in making an impact to bring about a difference. 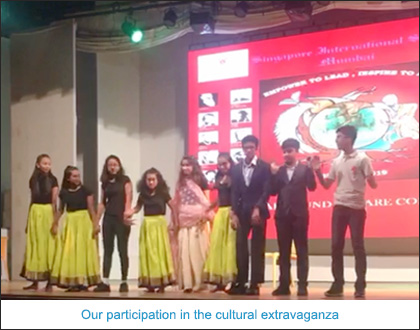 The third day was an exciting mixture of almost everything! It started with keynote speeches from people with diverse areas of expertise. Dr. Anish Andheria, president of the Wildlife Conservation Trust and an avid photographer, brought alive the beauty of the forests of India and Indian wildlife by providing them valuable insights into the pressing need of forest protection and preservation coupled with wildlife rescue. The second keynote speaker, Ms. Rhea Chhabria, a designer, inspired them to follow their dreams by sharing the story of her own journey in life. The keynote speeches ended with Mr. Shardul Bajikar, a student of natural history. 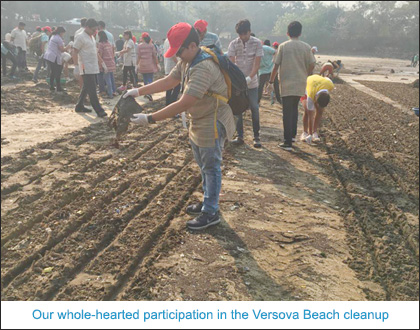 He spoke about plant-animal interactions to spread awareness about the glorious ecosystem. The speeches were followed by a baraza that centered on a stimulating discussion on the topics of the keynote speakers. They gained valuable insights and came back empowered with a will to affect change and ways to do it. The afternoon was dedicated to Service. 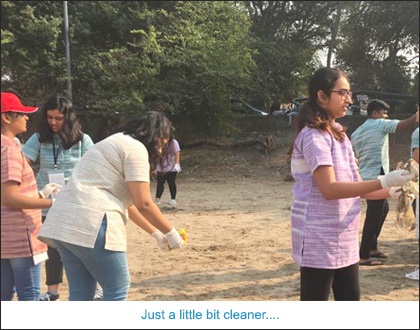 They visited the Versova beach, a beautiful, sandy stretch that would have been idyllic if not for the litter that marred its beauty. Armed with containers, gloves and our determination, they collected large amounts of waste, mainly plastic had been washed ashore from the sea. As they worked, the enormity of the plastic waste that chokes the oceans and marine life began to dawn on them. They made a great difference as they cleared heaps of plastic from the beach. Post their Service Project, it was back to base for the second half of the Cultural Performances by the participating delegate schools. Day 3 ended with a Social - a fun filled extravaganza of music, dinner and dancing into the night.

The last day had begun with the Closing Ceremony with a vote of thanks from the host School and a flag march. All schools were presented with individual certificates to the delegates and the Round Square Regional Conference 2019 was brought to a close. An event to remember and moments to cherish, an amazing, enriching experience! The enlightening baraza sessions, informative keynote speeches and enriching activities exceeded their expectations and helped push them outside of their comfort zones. They met so many new people, made so many new friends who they will remember for a lifetime. The conference had helped them open up, become more confident speakers and think in a better, more informed and mature perspective. 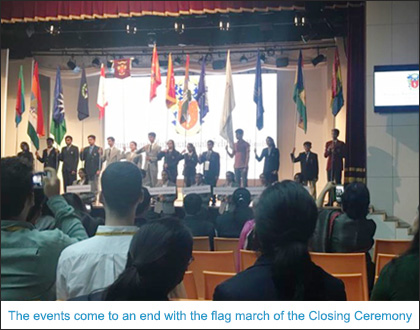 The theme ‘Empower to Lead, Inspire to Act’ perfectly epitomized the aim of the conference, to evoke and empower the leader within them. It has succeeded in enabling them to try and break barriers and perhaps realize the dream of a healthier world today, tomorrow and forever!

The Round Square Regional Conference 2019, held at the Singapore International School was an experience like none other and one I will be hard pressed to forget. The beach cleaning activity was major highlight. It was shocking to see the amount of plastic that chokes our seas but so very satisfying to be a part of the solution. I can confidently say that I am ‘Empowered to Lead and Inspired to Act’!

Round Square was an amazing, enriching experience. I knew it would require me to push my boundaries, but it really exceeded my expectations. The beach cleaning activity was my favourite part of the conference. It opened my eyes to the horrors of plastic. I will definitely think twice before using plastic after that experience.

The conference was amazing! There was a lot to learn from the keynote speakers. The baraza sections were a lot of fun. I feel that I am more confident after this conference. The conference has helped me to open up, speak with confidence and think in a better perspective.

What an enchanting, enriching and thrilling experience! This Trip I really had to propel myself to acquire results! But I extensively enjoyed myself! Via this trip I could uncover the real me as I learned several skills and traits that mound me to become a better human.

The entire conference was a lot of fun and educational. I enjoyed the baraza sessions and beach cleaning. I made a lot of new friends too.

The SIS RRSC 2019 experience was something that I’ll never forget. The beach cleaning made me realize the amount of garbage people throw into the ocean without even thinking twice, Also the speech by Dr. Andheria was very informative and made me realize the extreme danger other animal species are in.