From the 25th of June to the 10th of July, the Scindia School. Gwalior hosted a Round Square service project in Lamdon School, in the village of Thiksey in the Leh District of the Ladakh region. Four students and a Teacher from Dhirubhai Ambani International School had the wondrous opportunity of attending this service project along with 29 other students from different schools from India and Germany. The project involved, building two classrooms for the underprivileged, trekking expeditions, cultural immersion, spiritual visits to monasteries, drives to mountains and lakes, teaching tasks, camping, sports and embracing the Ladakhi customs and culture. 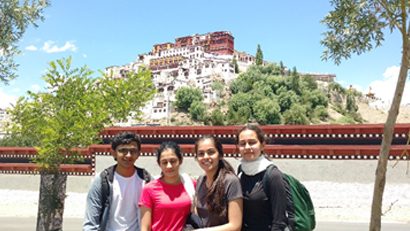 The first two days were carefully and thoroughly devoted to acclimatisation and an introduction to Ladakh’s rich culture. The main service began when we reached the village of Thiksey on the 27th of June and all of us were hit by mixed emotions. Ladakh Residency, our hotel in Leh, was extremely luxurious compared to the jungle tents, Ladakhi toilets and bath areas built on tree barks. The campsite was a fifteen minute walk away from the Lamdon Model School where we were building the rooms. We worked for six hours daily in groups, mixing with students from other Schools. There was one domestic group taking turns to cater to the wellness of the exhausted group members after they returned from a tiring day of work. This was a great idea since it gave the staff a break and made the delegates more independent. 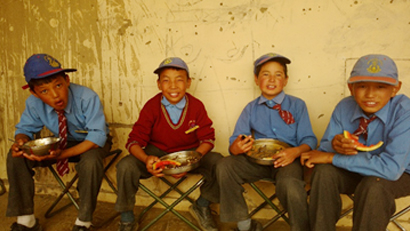 Work was extremely tough at first, carrying bricks and sacks of cement made our bodies sore until our muscles got used to the workload. The students worked in groups and took chances when it came to performing each task, and during our breaks at the work site we interacted with the children and played games like volleyball and badminton with them.

The highlight of the trip was definitely the visit to Pangong Lake and the six hour trek that we had to complete. Both the experiences made us appreciate nature’s beauty in the backdrop of barren landscape. The trek was a very good opportunity for the delegates as it helped them discover themselves and made them complete an expedition that seemed impossible. It awakened a feeling of pride amongst everyone and made them more confident about their abilities. These two outings gave the delegates a chance to take a break from the tedious work and socialise as a group, getting to know about Ladakh and exploring it’s beautiful culture. Another extremely auspicious moment was when the team got to meet his holiness, The Dalai Lama on the 6th of July, his 82nd Birthday. It was a private, interactive session where his holiness spoke to us about positivity, emotional hygiene and how it is extremely important to be happy and make others happy through compassion in the process. This affected the delegates in a spiritual way and made them grateful for all that they have. 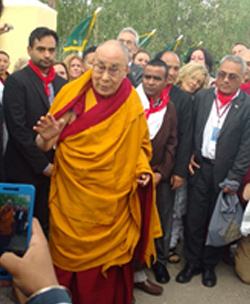 An extremely important part of this project were the interactions among the delegates. Students from 11 different schools from places like Germany, Lovedale, Indore, Chandigarh, Jaipur and Gwalior had ventured on this journey. The delegates got along very well and helped each other at all times. The aspect of immersing yourself into conversations with people from different cultures was extremely beneficial and that was an important learning experience from this project. We worked together as a team and built two rooms (a task that seemed impossible at the start) from scratch. We carried bricks and sacks of cement continuously, even through the continuous weather changes bringing in rain, sand storm, sun and the breeze. Some days there was scorching heat and other days it was raining heavily with a temperature of 13 degrees throughout the day. The ambition and hard work of each delegate and teacher was extremely remarkable and made this project successful. This project would have been impossible without the help of each teacher. They all contributed something different to the group and guided the students in the best way possible, In the end, we were left with memories for a lifetime. Whether it was interacting with the school kids and teaching them how to sing and dance or sitting in a large group and watching the sunset with a group of strangers that became a family at the end of the trip, each moment was extremely memorable. All the delegates left Ladakh with a sense of pride, accomplishment, satisfaction and gratefulness. It inspired us since we got to meet underprivileged students from the Lamdon Model School and got to know about how tough their lives are, but that doesn’t stop them from looking at the positive aspects of every situation. This journey changed each of the delegates by making them more confident and caring towards others’ needs. 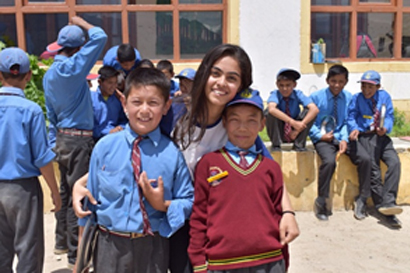