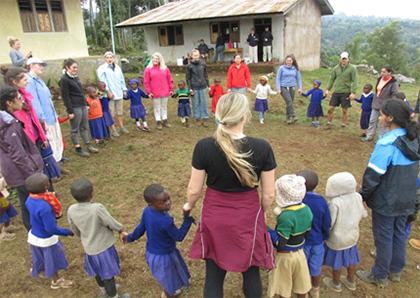 It can easily be said that this Round Square International Service Project in Tanzania was something we loved, something that made us who we are today and something we will always want to hold on to.

We departed from Bombay airport on the 10th of July, carrying backpacks brimming with meticulously packed clothes, shoes, and of course, food. We were unsure of what to expect from this trip, yet were full of excitement and anticipation. Not only were we spending two weeks in Tanzania building classrooms for local children, but we were also getting the opportunity to interact with 47 other students from across the globe.

Out of a total of 12 days over there, we worked at the project worksite for 8 days. One day they took us for a safari, one day we went to see the local Chagga caves and a coffee museum, and one day we went to a school where we got to teach 4th, 5th and 6th grade students English, one-on-one. We taught them a few basic words, with Swahili translations. Once we were done with a set list, we were free to teach them whatever we liked for the remaining time. This teaching opportunity gave us the chance to help the children out with basic conversational skills and allowed us to bond with them. The fact that it was a one-on-one lesson also allowed us to closely focus on aspects like their pronunciation, and we were filled with pride when they said “Goodbye, see you later” to us as we left, in perfect English 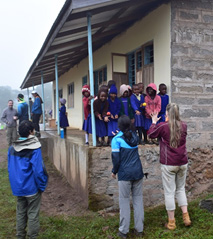 The nearest town, by the name of Moshi, was a two hour drive away from our campsite. Our campsite was on the lawn of a children’s hospital in a village called Marangu. We stayed there in 8-person tents, with one common area for all meals. We used the hospital’s facilities; 4 toilets and 4 showers (2 for girls, 2 for boys). The showers had freezing water, so if we ever wanted to bathe with warm water we had to wait till afternoon. Every afternoon, our local helpers would heat up a large drum full of hot water from which we could take some out in a bucket to bathe with. Our food was very basic, but still delicious. We got rice, mashed potatoes, pasta, or some form of carbohydrates, along with a vegetable stew. Occasionally, when we were lucky, we would even get avocados. 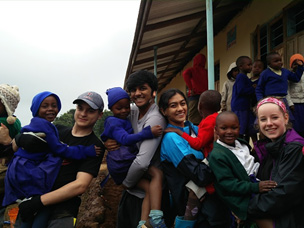 It was a 20 minute trek to the worksite, which was not too challenging, and a good warm up for us before starting work. It was an incredibly scenic walk, through some forested areas and open spaces, where we got fantastic views of Mount Kilimanjaro. By the time we reached the worksite, we were energised and ready to start our work for the day. Our work included carrying bricks, mixing cement, cementing the bricks, carrying pails of water, painting walls, decorating walls, sanding and varnishing desks, carrying rocks, and shovelling gravel.

Some jobs were tedious, while some were relaxed, so every day we got a balanced mix of both. A lot of the jobs required teamwork, like carrying bricks, which helped us build our coordination. Each job presented a challenge of its own, whether in terms of strength or skill, which we worked hard to overcome. We worked from about 8:30 in the morning to 12:30 in the afternoon, stopping for a 15 minute tea break in the middle. Then we headed back for lunch after which some groups would return and work from 2-4 while others used the time to bathe and do some laundry.

Even though we worked at the site for only 8 days, we made a profound impact. Our impact was not only visible through the walls that rose above formerly empty grounds, but also through the gratitude in the children’s face. A workforce of 50 teenagers meant that at any given point in time, there was also someone available with the necessary skills for any task, be it drawing, painting, or even carrying excessively heavy sacks of cement. We sped through our work efficiently and enjoyably, managing to build an entire classroom there; a classroom that would a brighter future to so many children, in so many more generations to come.

The weather was surprisingly cold and damp. We had come expecting arid, scorching conditions, but instead faced gentles drizzles, and low degrees during our entire first week. We were overjoyed to see the sun out during our second week, because even though it meant it would be much hotter and tiring, at least it would be less depressing and the clothes we washed would finally dry! 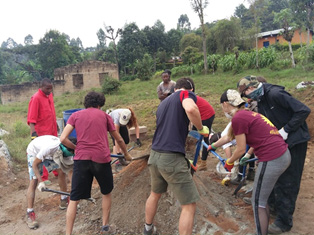 We were divided into 6 groups of 8-10 students each. Every day a new student was appointed as the Group Leader of their group. Their job was to make sure everyone had their work equipment, decide what job their group did that day, plan evening activities for the entire camp, oversee the work and make sure no one was unwell, and at the end of the day write a reflection about the entire day. We usually had plenty of leisure time in the evening, so even though the work at the site was extremely hectic and strenuous, we had enough time to relax and recuperate.

The trip wasn’t just a way for us to give back to the global community, but also a way for us to engage with a place a people who were foreign to us. Everyday took us a step further on journey of self discovery, and by the end of it we accomplished things which we never imagined we would be able to. What was amazing was the fact that we could see quantitative results of our work by the end of the trip. The (seemingly) endless walks carrying water and rocks, the tedious brick-laying, and the more physically friendly painting clearly translated to the real world wherein we could see the results. Apart from the physical (and more apparent) results, we were overfilled with a large number of qualitative results. We arrived at Kilimajaro as three students who didn’t know werent familiar with the place or the people in Tanzania. But we left Tanzania with a group of friends who we’ll never forget, and the memories of a people we will always remember.

Countless cups of hot chocolate and candid conversations later, I think it’s safe to say that we’ve emerged with a broader perspective of the world around us, and a greater appreciation for whatever we have