The students of DAIS visited Belfast, Northern Ireland for a Round Square Conference hosted by Rockport School, from the 12th to the 16th of March, 2019, to mark the fifth anniversary of the school and celebrate the theme - ‘Our Changing Environment’. This Conference was truly like no other. Not only did they meet people from across the globe, but they also made many friends with different views, different personalities and different lifestyles; but that’s what made them closer. They saw this spark of connection and the love of exploration in each delegate attending the Conference, making it one of their best experiences! 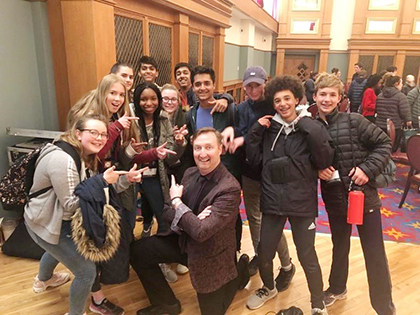 Over the days spent at Rockport School, they were given a view into each of the 6 IDEALS of Round Square. To start off, they experienced Internationalism as they had the amazing opportunity to interact with around 200 delegates from 25 different schools across 13 different countries around the world. Apart from just making new friends, they had the chance to learn about new cultures and differing perspectives. Moreover, DAIS press Conference Representative, Rajveer Batra, was the Indian flag bearer for the press release pictures taken by the host school. 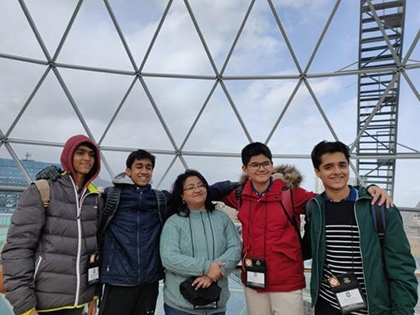 Indeed a proud moment for the entire DAIS delegation. They learned about life in different parts of the world, from the first-hand experience of their newfound friends, and also shared a lot about India’s socio-political environment and society with them. Overall, interacting with and befriending like-minded students who all aspire to ‘Be the Change’ was a brilliant experience: one, they will never forget!

The delegates were exposed to the ideal of Democracy with a visit to the Parliament Building. Here they were shown two of the meeting rooms and were given a brief history of the building and the procedure of legislation in Ireland. The first room was the main Legislative Hall where all the 90 members would meet and discuss new laws and other legal matters. Here the delegates participated in a debate on – ‘Should the legal age be reduced to 16 years’? During the debate, they were trained to raise a point during the debate and the formal procedure of voting in Ireland. The second room was for one committee of eleven members and they were shown the dispatch boxes. During the presentation the students were told how the building was hidden during the Second World War and what kind of Constitution was formed to include the unionist and nationalists.

Belfast is known for its experience of all four seasons in a single day. In Belfast, seldom does one see garbage or heavy traits of pollution. A close relationship and concern for its environment was effectively portrayed when the delegates got an opportunity to clean up the forest. Here, the delegates were made to clear pathways and separate the different kinds of logs. The dead leaves and logs were going to be reused and recycled to benefit of the people. This initiative depicts the close relationship between the society, the environment and their combined efforts at creating a sustainable lifestyle.

Adventure not only meant challenging themselves physically, but it also implied overcoming fears and obstacles that once held them back. The Conference promoted and facilitated opportunities for each one of them to step outside of their comfort zone. The slippery and sharp descent down the steps of the ruthlessly windy Giant's Causeway, socialising with people from a country they'd never been to, expressing their opinion publicly and learning Parliament procedures of a Consociationalism Republic - a political system formed by the cooperation of different social groups on the basis of shared power. At every place a golden chariot of opportunity presented itself, taking them on a new adventure every time. 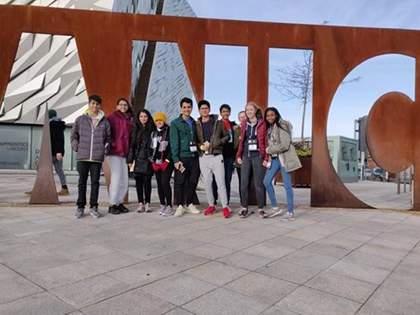 As aforementioned, they had seen a variety of different activities which were all executed in a manner that would help them build an experience of a lifetime. The leadership qualities in this Round Square while may not have been displayed individually were undoubtedly present in each student. Each participating delegate had the drive to succeed and a voice to share and that for them defines a leader. Be it stepping in to make a friend, or helping someone new out. No one hesitated, and well that was the beauty of Round Square Conference teaching them - Work together for a better cause.

Lastly, the Conference taught them the importance of protecting and preserving the surroundings, amongst many others such as team work and the spirit to never give up. The delegates spent an entire evening clearing up dead leaves and logs at the Clandeboye Estate, which played a major part of their Service initiative. These would be reused and recycled for later use and this exercise also helped them develop a close relationship with those working alongside them, so that together, they could finish the work effectively.

To, reflect upon this Conference as a whole, it was a different Round Square conference as they did not have any Baraza groups or Cultural performances, as one would normally expect of a conference. However, it was a wonderful experience, and the DAIS students made several close friends with delegates from various countries such as Pakistan, UK, USA, Romania, Canada, France and more.

“This conference has been one of the best experiences. From making friends from Atlanta to Karachi, or playing card games, to facing the winds of the Giant Causeway, it has truly been a trip to remember. Moreover, it has made me respect the beauty of every part of the world and to know that each individual is different; in a good way!” – Rajveer Batra 9B

“I learnt and understood the importance of being a team player rather than a soloist which is a crucial component to each and every aspect in one’s life. Moreover, I developed utmost respect and appreciation for everybody's cultural diversity and differences. That uniqueness is after all what made it amazing to be part of this Global Conference!" – Kareena Shankta 9C

“Interacting with and befriending like-minded students who all aspire to ‘Be the Change’ was a brilliant experience: one I will never forget.” – Shiv Kampani 9C

“I loved this trip and it was an amazing experience where I made friends while learning about the amazing culture of Northern Ireland. The natural beauty of the Causeway and the incredible history of the Parliament Building made the trip enriching yet very fun.” – Shay Khanchandani 9C

“This conference was a truly memorable one and during our short trip of just 4 days, I've made friends for a lifetime.” – Aayushi Nainan 9B

“This was a wonderful experience where we interacted with hundreds of other students from 13 countries, making countless friends and more memories along the way.”– Aaryan Binjrajka 9C

“It was a really great experience with huge diversity of cultures!” – Richa Jindal 9C