The Ladakh Service Project and Trekking expedition at the Thiksey Village was one of the greatest experiences of my life. It was the most complete trip in terms of feelings and emotions. There was adventure, thrill, hard-work, fear, content, friendship, sadness and anticipation. The sixteen days that I spent on the trip, whether it was building the rooms, trekking up the mountains or even sitting at the dinner table reading reflections- was so much fun that I would not mind doing all of that again. 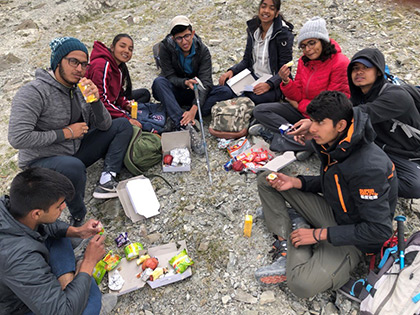 We spent two days at Leh, acclimatizing to the high altitude and also getting to know each other. Mixing with the group and trying to make friends was difficult at first because we were very much different from them, but after talking about schools, sports and future aspirations, we did make friends. After two days in Leh, we left for the Lamdon Model school in Thiksey Village. After a warm welcome and cultural program, we were asked to rest and in the evening, we began collecting bricks from the kiln and stacking them at the construction site. The bricks were 7-8 kgs and because it was the first day, they felt heavy and the dust was disturbing. We used dust masks, gloves and clothes to protect ourselves. This was the first time I did labor intensive work and it was a very new, different and fun experience. I also really liked that for the first time, we actually worked as a group.

The next three days was construction work. We passed bricks and cement. Surprisingly, with the passing days we grew immune to the dust and the weight of the bricks and the cement. We made long lines and passed them from one end to another and also passed them on to the masons who were making the walls. 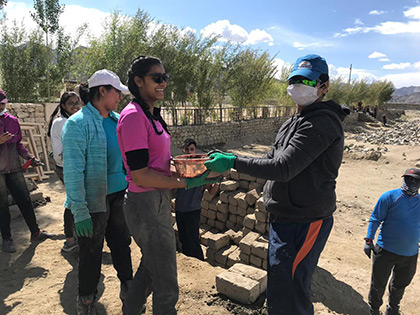 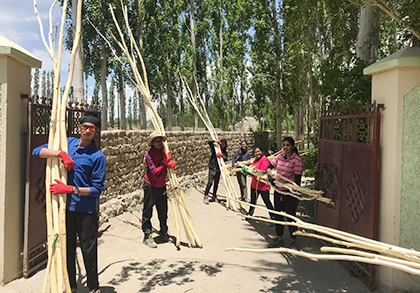 The day we visited the Tso Moriri lake was one of the longest days on the trip. We woke up at 4:50, left at 6:00 but only returned at 8:30 at night. It was around 13-14 hours of travelling for an hour of visiting the lake. Although the lake was beautiful and the drive was scenic, it was way too long and most of us were tired at the end of the day. The night before we left for the trek, we had a cultural evening where was saw traditional Ladakhi dances and we also put up three performances. It was a very good farewell and the last moments in the Thiksey Village. 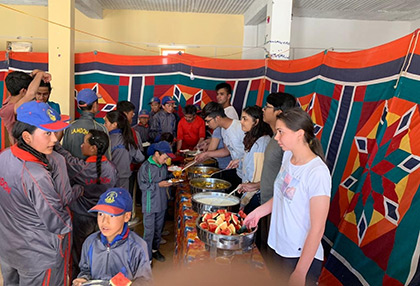 The second part of the trip, the trek is also an experience I will never forget. Firstly, I learnt that the things I thought I couldn't do, were not intact that difficult. I just had to be more strong mentally.

The first day of the trek was easy and not that long. The second day of the trek for me was life changing. It was an optional trek and we were allowed to do as much as we could and then turn around. After going two hours into the trek, I was all ready to give up, turn around and go back to the tents. But after a little motivation and encouragement from my fellow delegates, I almost went up to the summit. I trekked for more than seven hours that day and realized that it was not that I could not do things, it was just that I never believed I could

The fourth day of the trek. A day I will never ever forget. The longest and most adventurous trek I ever did. 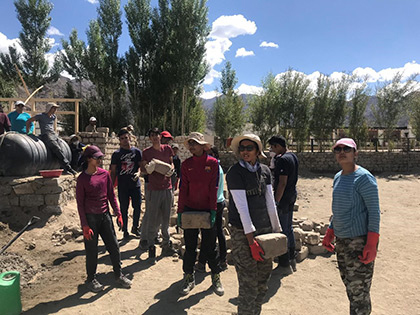 My day started with fear. I was too scared to even start the trek because I was fully convinced that I would not be able to make it to the top. But by maintaining a constant pace and taking breaks at regular intervals, I made it to the top which was one of the most special moments of my life. We took a lunch break for more than an hour on the middle of the mountain and mixed whatever we had to make whatever we could to eat. Then we danced our way down which was the best was to release the stress of going up. After two hours or so of coming down, we did not know where we were going. We were lost. We looked for any hints that’d tell us that our teammates had gone on the same road. It started raining and we had no rainwear. But through all these difficulties and problems, we soon realized we were on the right track and finally reached our destination after more than 10 hours. 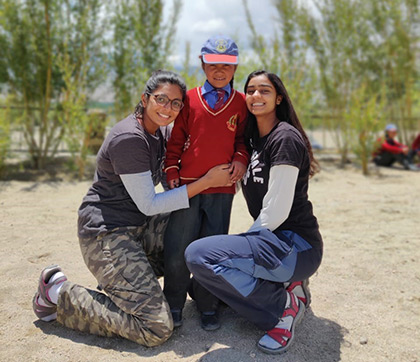 The fifth day of the trek was the easiest. It was a short two hour walk to the cars. It was a nice, gradual walk with not much up or down hill. Although a report is too less to summarise the emotions and experiences of the Ladakh trip, I have tried to put in all that I could, as much as I could. These 15 days have been the most special days of my life and I would forever love and want to go on the same trip all over again.