Perched amongst the deep northern frontier of the Indian subcontinent; rising amongst the towering snow-capped peaks of the Indian Himalaya lies Leh, Ladakh. With an ensemble of approximately 30 students from across the nation (along with one student from Kenya); all with an intrinsic flame burning within them, united under our common affinity for service we set our ambitions and actions towards contributing to the betterment of the region and the society. It was five of us fortunate delegates that had seized this opportunity to venture into one of the most revered and elevated regions in India. Encompassing far more than just our service to the Lamdon School at Thiksey; we were exposed to new social and cultural environments that would serve to only further develop our resilience, personas and knowledge. 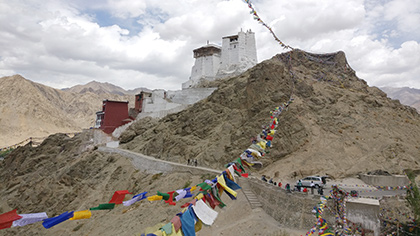 A literal transition from the humid and congested city of Bombay at the foot of the world standing at sea level; to a mighty 11,000ft at which the Ladakh lays pedimented upon would require a period of 48 hours for our bodies to acclimatise to the severely lower oxygen levels in the dry and barren cold desert. Though rearing to go and packed full of energy, it was only after an intense game of tag that we would fully comprehend why this period was one strictly reserved for rest! From the Shanti Stupa, we glanced upon the grandiose terrain that formed the “roof” of India. Though with approximately three hundred steps leading to this gleaming white pearl, harboured amongst the scorched mountains of the Himalayas; this “short walk” was one fuelled by water and social bonding amongst the group! As we walked toward the Leh Palace; a structure deeply intertwined and at the very cortex of Leh’s tumultuous past, we exposed ourselves to the Ladakhi terrain; scaling and traversing the ragged contour, through roads, hills and graveyards alike (this certainly made for quite an “unique” experience)! At the Leh Palace, we would virtually immerse ourselves into the history of Leh, learning about the rich history of compassionate religious philosophy of the region that still remains an integral part of the culture and guides the current day societal discourses.

As our squadron rolled into the Lamdon School located at the base of the celebrated Thiksey Monastery that rose amongst the jagged cliffs which encircled it; our spirits remains highly invigorated! The reception at the Lamdon School truly touched our hearts; infectious smiles, laughs and charismatic songs from the students was something that will remain etched in our memories forever. We learnt of their hardship, determination and how the children walk several days from their villages to the school in order to attain education, something that many of us take for granted. Despite their hardships and meagre possessions; the children would not show or exhibit the slightest of problems; rather remain ecstatic and positive in the face of adversity with the most minimal of facilities and equipment. During our “domestic days” we would venture into their lives and gain insights on their perspectives about modern day affairs that remained nothing short of impressive. Captivated by their intrinsic drive to learn and assimilate knowledge; we learnt about their desires and passion. All of this would serve to further ignite our passion and desire to work towards a better future for their community; though we had gone there to give; we would come back richer ourselves. In the next couple of days, we would deeply submerge ourselves into rallying, stacking unloading bricks weighing upto eight kilograms to hoisting mud cement and finally transporting wooden “talu” from deeper in the surrounding towns. Though working with an inner drive and spurred by the fact that we could see the children in the evening; it seemed that our exhaustion was superseded by pure emotion. From learning Ladakhi dance, to revelling in the local games that they would teach us, and finally getting absolutely knocked out playing football with the children; our evenings were full of elemental bonding. 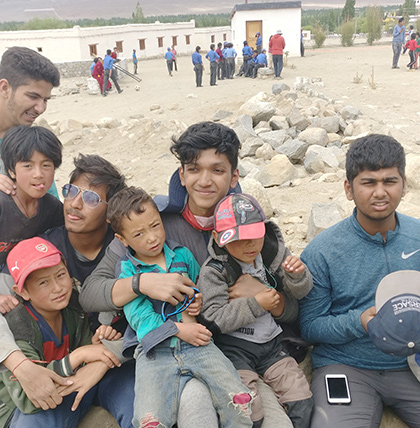 Connected without connections; as both a cohort and a community, we embellished bonds stronger than those that could ever be achieved by the likes of social media. Coordinating and exhibiting our best teamwork skills, we would push ourselves to the limit, both physically and mentally; something that was fuelled by the constant service of the domestics team and tragic jokes in the evening! For a large proportion of us that would include myself, the main source of drive and inspiration was something that we would attain from the innocence and simplicity of the cherubic children at the Lamdon school. 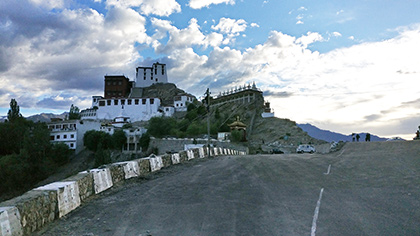 In my perspective, one of the most memorable moments of the trip would revolve around the children; with the evenings filled with their presence. We will savour the experiences with them; from trying to learn Ladakhi dance from the young girls to teaching the kids how to solve a Rubik’s Cube! We feel the learnings that we could infer from them are pivotal to our development; their resilience and determination in the face of adversity is something that definitely we would remember and act as source of inspiration in our difficult times. A few of us had ventured up to the Thiksey Monastery at roundabout 4:30 in the morning to stare in awe at the ethereal sunrise that rose from amongst the barren and robust mountains shrouding the monastery. With the unwavering rays of the sun surfacing from behind the jagged peaks shrouding the monastery; sunrises at Leh were unlike those that we’ve ever seen; entrancing and captivating. As a few of us ventured deeper into the monastery, we found ourselves at the prayer hall that witnesses to one of the most famed and celebrated rituals at the Thiksey monastery; where we were treated to butter tea served by adorable little monks in training! Their commitments and devotion to religion that was unwavering in the face of dozens of tourists was something that we think we would all find very commendable!

In these short seven days at the school we had fostered friendships ever so strong that on the day of our departure from the school, spirits were melancholy as we embraced hugs, tears and goodbyes and hopeful promises to remain connected forever.

Trekking through the Himalayan Outback was something that had long reined on my bucket list! As we began to set our paces and let heel fall in stride; the trek gave us yet another opportunity to communicate with our team and bond further. Encapsulated by the towering mountains across the valley; the trek was a time when we could temporarily leave our current lives, stress, pressures and just soak in our planet in every moment. One thing that was definitely very peculiar and interesting was the concept of a Ladakhi toilet; 6 feet holes in the ground with a tiny “toilet” definitely put our aim to the test! At the apex of our trek, would stand the Gandala Pass; as we scaled deeper into the valleys of the Himalayan Outback, shattering our lungs with the seemingly minimal levels of oxygen; the Gandala pass remains a minor feat of physicality but moreover an endeavour fuelled by the bonds we secured and fell back upon during the ascent. 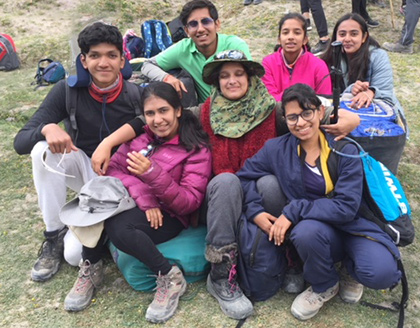 Despite the perils of one of the most gruelling terrains of our planet; trees continue to flourish in the otherwise arid terrain; as ferocious and vehement winds strike them, they bend and adjust to their climatic conditions. It seems fitting that much like these very trees it would be our resilience, adaptability and perseverance that would give passage onto the top of the pass. This is an analogy that we think would resonate with practically every obstacle that we tackle in the face of adversity. 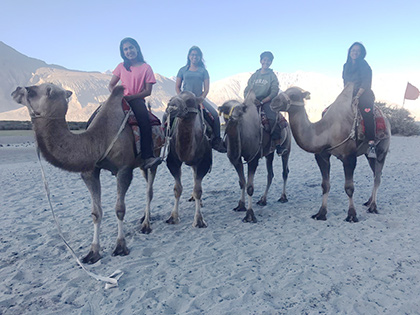 This period of time had been one that represented the assimilation of students driven under the common ambitions to create and contribute towards a greater cause, a greater society. We would leave the Lamdon School with something far greater than we had come with; something greater than ourselves; the pure and innocent happiness of the children that we could touch. They will remain in our prayers and hearts forever. As Mahatma Gandhi had once famously dictated; “the best way to find yourself is to lose yourself in the service of others.”, the relevance of this quote was once quite obscure; though now it’s something that all resonates within us.